Janice Dick is a Saskatchewan writer who blogs at Tansy and Thistle Press. She has written, among other things, two historical fiction series about Mennonite families from Russia, based on their history. Book 2 of the “In Search of Freedom” series is loosely based on the memoirs of a man who survived Soviet persecution of his family in China after fleeing from Siberia. Book 3 will be out soon.

Janice recently interviewed me on her blog, where I have enjoyed reading about a good number of other authors as well. The interview is posted at: https://janicedick.wordpress.com/2018/07/24/author-interview-sharon-plumb/ . Thanks, Janice!

My parents were married on April 2, 1961. My dad is gone, but today would have been their 57th anniversary.

For their 40th anniversary, my sister and I and our families re-enacted their wedding for them…well, their wedding as we imagined it. I played my dad in a plaid shirt and suspenders, my brother-in-law played my mom, my youngest son was the “flour” girl, and so on. We had fun, and they laughed.

Here is the play for your enjoyment. Happy anniversary, mom and dad!

Here is an interview I did recently with CANSCAIP Sask.

Sharon Plumb Hamilton writes stories and plays for children of all ages. She has two traditionally published books, a picture book about a bear who shovels snow off his roof and a young adult science fiction novel about a lonely dragon and his girl. Right now she’s finishing up another YA novel with all dragon characters, and touching up a middle grade adventure novel set in a garden of giant vegetables. She also writes and directs children’s Christmas plays.

Sharon is currently the president of CANSCAIP Sask Horizons, and really excited about these “Meet Our Members” posts. Other writers have been a huge help and encouragement to her, and she hopes this group can be the same for you. 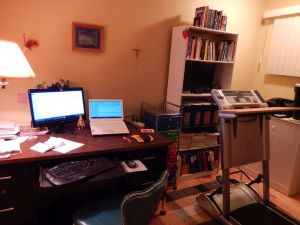 I have three workspaces: my desk and my treadmill in my bedroom, and a large table in our family room where I write regularly with two friends.

I don’t really have a typical workday, but one that happens fairly often (a couple of times a week) starts with my friends Alison and Marie coming over to write at the table I mentioned above. We usually talk a little bit before we get going, but then work quietly and steadily. If we ever start talking again, my son Richard, who works at his computer in the same room, reminds us why we are here. These mornings are good because we all know that this is writing time and that’s what we do. If there isn’t something else I need to do after they leave, I often keep writing. I also do my best to write on the mornings when they aren’t here.

List three of your most favourite things in your workspace and why they are meaningful.

Other than the friends I write with…

1. My treadmill desk. Sitting too long makes me sleepy and stiff, so I love walking while I work. I learned the hard way, though, that I can’t walk all the time. I did too much at first and had to stop for over a year while I went to physio and repaired the damage. Now I pace myself and stop after 45 minutes, then do it again later if I want to. Now that the sidewalks are icy, I’m extra glad I can walk inside again.

2. My office glasses, which are for seeing close and medium distances and

make it comfortable to look at the screen. With the progressive lenses in my regular glasses, I had to tilt my head back to see the screen out of the bottom of the lenses. Not comfortable at all! Sometimes I wear the office glasses all day at home, because even when I’m not writing, most of the things I do are close at hand.

3. Richard, my best story coach. He analyzes everything I write with his super-

logical mind, then points out every part that doesn’t make complete sense or is inconsistent with something that happens on another page. Then he gives me suggestions for how to fix things, or discusses my fixing ideas. When I hear him say “I like it!” then I know I’m onto something good. (He likes to read other people’s manuscripts too, as long as they are fantasy or science fiction and the author is looking for honest feedback.)

Do you have any rituals in your work habits?

Not really, except that I am taking the advice Alice Kuipers gave in her Facebook talk last spring (https://skcanscaip.wordpress.com/category/workshops/) to do the writing first and leave the other things for later. I had already noticed that whatever I started in the day was what I got done. So now I try to be intentional about doing the thing I most want to accomplish that day. If I don’t answer your emails until later in the day, that could be why.

What do you listen to while you work?

Nothing. If I listen to music that’s what I think about. I like silence when I work.

What is your drink and/or snack of choice while you’re working?

Tea. Green or black in the morning, and herbal later in the day or I can’t sleep.

How do you develop your story ideas? Do you use an outline, a muse, or some other technique?

I can’t seem to create story content and compose nice sentences at the same time, so I do a lot of pre-writing with a pen in a notebook. I let the ideas flow and ask myself lots of questions until I have a good idea of what the story is about, who the main characters are, and where the story takes place. Then I write a general outline. Then I outline the chapter I am going to write. Sometimes I carry on without an outline, but when I get stuck or bored, I do more pre-writing and outline again.

h character wants to accomplish. I make sure there are conflicting goals and that something is going to change by the end of the scene. Sometimes the characters come to life and change the direction of the story, but that’s fine. For example, in the dragon novel I’m writing now there is an impromptu love triangle that just happened. Since I hadn’t planned it, I had no idea how to resolve it until one of the characters surprised me at the end by doing something I didn’t expect. Problem solved, and I didn’t have to figure it out.

All my planning and pre-writing is a way to bring my characters to life so they will take the story into their own hands. There are always plenty of things I don’t know about the story until I write it.

If you were forced to share your workspace but could share it with anyone of your choosing, who would it be?

I suppose it would be Alison and Marie and Richard, who already share my space a lot of the time. But if I had to choose someone I don’t know, it would be Patrick Rothfuss, author of The Name of the Wind and A Wise Man’s Fear and the third book in his trilogy, which I am impatiently waiting for. I would sit quietly and watch and hope to learn how he creates such a vivid and compelling story. From the amount of time between his books, I expect part of the answer is hard work and a lot of thought.

What is the best piece of writing advice you’ve heard or received?

There are a few, but I often go back to what I heard from Anita Daher at a talk on self-editing at one of our Prairie Horizons conferences. She said (and I paraphrase), “It doesn’t matter if you write horribly as long as you edit beautifully.” This advice has enabled me to write when I am painfully aware that I’m not doing justice to the story I envision. And I like editing.

Thanks to Jennifer Chambliss Bertman for the use of her Creative Spaces interview questions.