A Creepy, Carroty Story for Halloween

The carrot was two-headed… 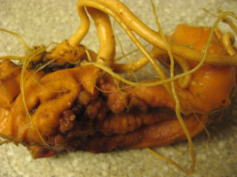 The main root was torn open…

…by a smaller root clawing at its back…

Where it split, the carrot was red like blood.

Not so long ago in a land not so far away, a man and his new wife moved to the countryside to grow vegetables. She admired his strong hands and tanned shoulders, and expected to be happy even though they were as different as earth is from water.

While he loved the feel of dirt between his fingers, she spent her time moppping it out of their small house. While she listened to the crows and reported to him all the gossip she heard and more that she hadn’t, he spoke only when necessary, and his words came out in sharp bursts like a spade splitting the hard soil. While she boiled the soup and brushed her hair and sewed tiny clothes for the child she hoped would come, he dug furrows and pulled weeds and watched hungrily over the green shoots.

As summer wore on, he grew weary of her incessant chatter. It filled his head like pounding rain, and he retreated into his silence the way a beetle creeps beneath a rock.  His moodiness felt to her like a stone wall, so she spoke more often and more shrilly to break it down. But to no avail. The time came when she looked at her husband and knew he could not remember why he had married her.

She watched him in his garden chasing away the hungry crows, lovingly picking worms off his cabbages, tenderly untangling bindweed from his beanpoles, and caressing the soft carrot fronds in a way he had never touched her hair. Since he would not listen, she poured out her complaints to the crows, and they answered, “Caw, caw.”

As the warm days gave way to cool nights, she watched her husband eating the young carrots with a rapture he had never shown for her soup, even though soil still clung to their fat roots, and sleeping under the prickly pumpkin leaves, smiling as he never smiled in her soft bed. She saw that after the vegetables were stowed in the cellar, her husband would spend his days and nights in that earthen place among the corpses of his silent beloveds, and jealousy burned in her heart.

That night, while he slept among the worms on the hard dirt, she crept into the garden and picked all the vegetables except one carrot that he held tightly in his sleeping hand. She dragged the usurpers behind the house and hacked them to bits with an axe. Even if I starve, she thought, at least my husband will be mine again. But when her husband awoke and saw what she had done, he gave a fearful shriek and dropped dead on the garden patch, clutching the one remaining carrot to his heart. Try as she might, she could not pull it from his dead hand.

Then the wife cried out to the black crows that feasted on the remains of her rivals. “My husband rejects me even in death, and without him I will surely starve. If only I could be a carrot also and sleep as she does in his embrace.” The crows answered, “Caw, caw.”

So she went to the garden and lay down beside her dead husband, with her fingernails dug into the carrot’s crisp flesh. The crows flew screaming in circles above them, and soon dark clouds rolled across the sky. Torrential rain churned the soil they were lying on into thick mud that swirled over their bodies and buried them, all three.

Later, a passing stranger wandered into the yard and saw carrot fronds growing tall in the garden patch. Reasoning that good food should not go to waste, he waded into the mud and pulled it out. It came out clutched tightly in a skeletal hand. But it was the sight of the carrot that made him drop it and flee with terror in his eyes.

Two-headed, twisted, warty and tentacled like some mutant insect of the sea, its main root was torn open by a smaller root clawing at its back: two heads battling over one tortured heart. Where it split, the carrot was red like blood.

After the stranger left, the hands pulled the carrot back into the soil. Word spread, and people steered clear of the accursed garden patch. Only the black crows stayed, flying in circles over the doomed lovers and crying sadly, “Caw, caw.”

Note: I wrote and published an earlier version of  this story in 2012 on my other blog. If you want to copy it, thanks! I’m glad you like it. But please provide a link back to this site.

Sign up for my newsletter and get The Legend of Morwaka for free!